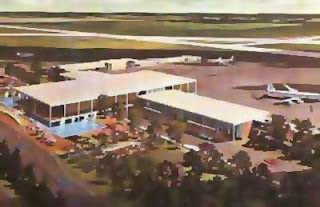 What better place to start? The origin point of so many adventures was burned into my memory at an early age.
Tulsa International Airport.

Since my father worked for American Airlines we enjoyed the luxury of air travel back in the pre-deregulation days when it was out of reach of most Americans. This plus the fact we had relatives living in California (as do most Oklahomans, ala Grapes of Wrath) meant we flew west almost every Summer.

Each of those trips began with a cab ride to Tulsa International Airport. As the sun rose we would pull up to the glass and steel terminal with the smell of jet fuel wafting through the morning air. 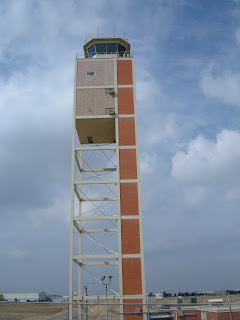 Those early memories from the Sixties still inspire me to this day. The glass walls of the terminal. The airport's control tower (right). Even the original Boeing 707 tail fin.

I didn't know it at the time, but the clean lines and no-frills look are known as International Style. The architects, Murray Jones Murray, received numerous awards for the design of Tulsa International. Today additions have obscured the simplicity of the original building and few people appreciate it. Then or now.

I think I liked it because it looked like something I'd made with my Super City building set.
By JRB at October 29, 2007

I have never even looked at the control tower. I will next time I'm up that way.
I always like the Tulsa airport design. Very simple and clean.