Historic tax credits were in the news again here in Oklahoma. Unfortunately. 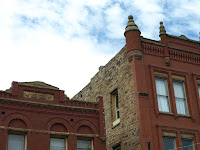 After placing a two-year deferral on the payments, state legislators revisited the program again last month with an eye on axing it entirely. This short-sighted approach has left developers in a quandary and projects on hold. Politicians claim they have no "hard evidence" of the benefit these incentives provide. But the proof is all around them.

The Tulsa Foundation for Architecture has compiled a compelling case for historic tax credits. A wide variety of properties across the state have been restored, updated and rescued by virtue of these funds. In Tulsa the benefits are evident on most any weekday evening. See all those people? Yes, there are people downtown after 5:00 pm. A scant ten or fifteen years ago that would have been unusual.

One of the highlights in 2011 was a Braniff Airlines exhibit. This intrigued us since Braniff was a "local" airline that started in Oklahoma City, later headquartered in Dallas.

But that didn't interest the crowd in Palm Springs. They were there to see the colorful uniforms and far out paint schemes that Braniff introduced in the Sixties. And a few of those in the crowd came to reminisce.