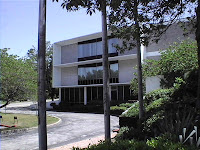 In 1944 the United States Junior Chamber voted to move their national headquarters to Tulsa. The city even tipped in $100,000 to entice them. There's also a yarn about Oklahoma City losing out because of a poker game- but that's another story.

The Jaycees took up temporary residence in the old Akdar Shrine Temple until their modern new building, the winner of a 1949 design competition, was completed. It was dedicated in 1951 on West 21st Street, across from what was then known as Boulder Park. 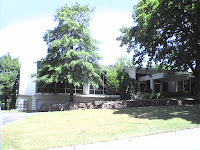 The ultra-modern building was classic International Style with clean lines and deep set windows. Originally cool screens were set in front of the west-facing windows. The design is credited to Hideo Sasakietal by the Tulsa Historical Society, but publications from the period credit Morris and Honn. Donald Honn's work will be familiar to anyone that has visited Tulsa's Lortondale neighborhood.

As a youngster growing up in Tulsa this building fascinated me. It had that park-your-helicopter-on-the-roof look so captivating to kids like me in the Sixties. I'd always imagined men inside wearing lab coats, carrying clipboards to jot down any important nuclear equations that might come to mind as they wandered the terrazzo corridors. 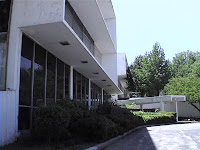 Of course the reality was much different.

The building was a service center for an international organization. Employees managed the day-to-day workings of the association and provided member benefits. No lab coats needed. But membership in the Jaycees was dwindling. Their staff, once more than 100, was less than 20 when the Jaycees moved out of their hip digs.

Age was also taking its toll on the building. The heating/cooling system was in need of replacement and the dreaded "a" word was often mentioned (asbestos). In 2001 the building was sold and property for a new headquarters was purchased on South Lewis. Eventually a new building, looking more like a branch bank than an international headquarters, was built.

Late in 2003 demolition was begun.

Today the corner is covered with Tudor-style homes. When the building was originally purchased from the Jaycees the plans were to build a high-rise called the Portofino. The neighborhood came unglued when they heard about the idea, and high-rise gave way to low-rise. But with big pointy roofs.

The building was by Morris and Honn, i have original construction slides from Honn's daughter.

Hideo Sasaki was the landscaoe architect, this was one of his earlier works as he went on to form his own large international landscape architecture firm.