Whenever you widen an interstate highway originally built in 1957, you're going to have to mow down some mid-century architecture. The latest victim of the I-44 widening in Tulsa is the Patrick Henry Apartments complex, until recently located on the west side of Harvard just south of Skelly Drive.

In their heyday the Patrick Henry was quite fashionable. 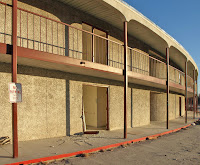 More recently these units had become Section 8 housing and suffered badly at the hands of uncaring tenants. I snapped these photos while the demolition was ongoing. Considering this, the relatively good condition of the structure and interiors was actually quite amazing.

The two-story complex was comprised of two semi-circular sections that formed a football shape. A circular clubroom building in the center connected the two halves and served as laundry room, post office, etc. Even the stairways going up to the second story landings were circular.

The rotund theme was also carried into the living space. Kitchen areas featured round pantries (see photo below) and interior walls were curved as a matter of necessity. It's a shame the demolition company wouldn't allow some architectural salvaging to take place before the sledgehammers started flying. 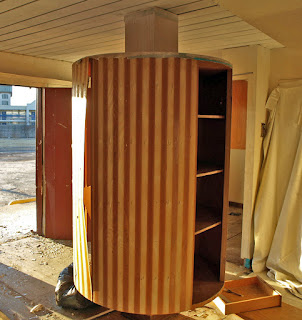 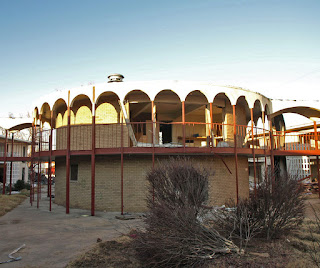 My first exposure to these buildings was in the late Seventies when I held a summer job at the Trade Winds Hotel, who owned the complex at the time. I did light maintenance work at the hotel and was asked to check the toilet for one of the tenants at the apartment complex next door. My jaw dropped when I walked in and saw the round closet just inside the door!

I have no idea who designed these unique apartments. I'm pretty sure they're mid Sixties. If anyone can shed some light on their origin please click Comments below and share your insight!
By JRB at January 09, 2009

Sad to see them go, Rex. Nice job snapping some pics before they are just history.

Thanks for 'getting it'

Keep up the outstanding work!

Those are awesome. I always wondered what they looked like on the inside. I'm glad you caught a glimpse and posted it.

This is one of the unfortunate consequences of developing a city around one of the busiest interstates in the country. In the future, I hope city planners and ODOT will consider this and other factors before putting a major highway in the middle of the city.

That said, it is a real shame to see Tulsa lose some of its history.

Blaine Imel designed the apartments and I'm unsure about the year.

I don't know when the apartments were built, but I do know they were there as early as 1966, when I first lived in a nearby neighborhood. They were fairly new at the time.

About building freeways through the middle of a city. The problem is that when I-44 was built in the 1950s, it was beyond the southern edge of the city. It was largely rural around the site of today's highway. Everything eventually built up around it.

It was largely rural around the site of today's highway...

That's right. Thus the name for this stretch of I-44, "Skelly Bypass."

I know their just the 'messenger', but Ark Wrecking has been responsible for more tear-downs than I can count. No way could I work for a business that destroys historic architecture.