Oklahoma Modernism Rediscovered
April 30 to June 7, 2009
Oklahoma City Museum of ArtFamous architectural photographer, Julius Shulman, stopped by OKC's Untitled Artspace last September for a small exhibition and lecture. If you were unable to attend that event, don't despair- you'll have another chance April 30 through June 7, 2009. Those are the dates for Julius Shulman: Oklahoma Modernism Rediscovered, featuring photographs of some of Oklahoma's most unique mid-century buildings. Photographed by one of the world's most famous architectural photographers! 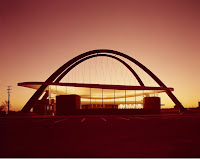 If the name doesn't ring a bell, the style probably will (see Modernity and Metropolis from the Getty Archive). Shulman, now 99, is credited with creating the "look" associated with California modernism. His photographs of architectural icons designed by Neutra, Koenig and Lautner have become icons in their own right.

The exhibit in Oklahoma City will showcase his work here in the Sooner State in the early Sixties. His subjects include Founder's Bank (right), Bruce Goff's Bavinger House in Norman, the rotund State Capitol Bank and many more. Special events are also planned, including a book signing on opening night.

Visitors will have a chance to see the architectural subjects Shulman photographed in the Sixties. At least five commercial properties and private residences are on the schedule and the lucky tourists get to see them up-close... inside and out! Cost for the bus tour is $45 for adults, $35 for OKCMOA members or $25 for students. A box lunch is included.

The bus tour departs from the southwest parking lot of St. Luke’s United Methodist Church, 222 NW 15th Street in Oklahoma City. Seating is limited and is available on a first come, first served basis. Advance tickets will go on sale at 10 a.m. on Tuesday, April 21. Purchase online through www.okcmoa.com or call 405-278-8237 between 10:00 am and 5:00 pm.

For more on the works and theory of Julius Shulman listen to this excellent 2005 interview from Day to Day.
By JRB at April 04, 2009

Email ThisBlogThis!Share to TwitterShare to FacebookShare to Pinterest
Labels: event

Hi there - Jen from OKC here - I recently wrote about Shulman for Oklahoma Today. Any chance you could take a look at a painting I bought today and give me some idea of the architect, location, etc.? I will post later tonigth. Thanks, jen

I would like to see the painting as well. Is it a rendering of a building? You can send the image to my email at hood.shane@gmail.com.