Every time we pass by the Myriad Botanical Gardens it reminds me of the science fiction classic, Rendezvous with Rama.

And the unusual cylinder perched in the midst of downtown Oklahoma City is almost as mysterious as its fictional cousin.

Rendezvous with Rama was written by Arthur C. Clarke in 1972. The plot is based on an "asteroid" hurtling through deep space towards Earth. As it gets closer scientists discover the object is actually a 50-kilometer long metal cylinder- not an asteroid at all. Astronauts are dispatched to examine the mysterious object- codenamed Rama- and discover an artificial atmosphere inside, complete with clouds, islands and rain. 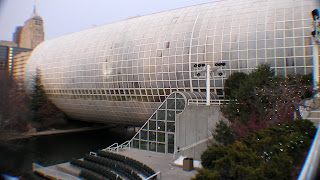 Just like the mystical spaceship in the book, the Crystal Bridge Tropical Conservatory at Myriad Gardens is a cylinder. It even contains a somewhat artificial atmosphere- in this case it's a tropical garden in the middle of Oklahoma, instead of the vacuum of space. However, unlike Rama, it is not hurtling through space, nor spinning to create its own gravity. But a visitor to this unusual complex may wonder whether that concept is really so far fetched!

The unusual neo-modern style of the structure has a decidedly steam punk feel to it. White framework and acrylic panels are reminiscent of the palatial greenhouse-palaces of Victorian times. Of course the name, Crystal Bridge, would be another clue! But the circular theme and Brutalist concrete of the entryways and interior is 100% Seventies.

The history of Myriad Gardens dates back to the Sixties, when Oklahoma City commissioned the world renowned I.M. Pei to design a comprehensive redevelopment plan for downtown OKC. This culminated in a two-part plan that would come to be known collectively as The Pei Plan. A convention center and gardens complex were central features of the massive development. Connections to retail and residential "superblocks" were to integrate the whole of downtown Oklahoma City. Construction of the gardens began in 1977, but it wasn't until 1988 when the unique Crystal Bridge was opened.


Historic Footnote: The Pei Plan was controversial when it was released in 1964, and became even more unpopular over the years. It failed, like most large-scale urban developments of the time, to lure citizens back from the 'burbs. Over the years the endeavor became symbolic of the urban renewal's failures and the systemic destruction of historic buildings. A historic preservation group in Oklahoma City even took their name from one of those lost buildings- the Criterion Group is named for the ornate Criterion Theater. The theater was built in 1921 and razed, as part of the PEI Plan, in 1973. 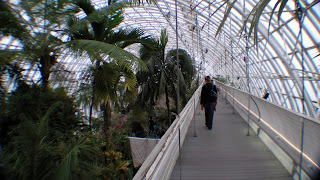 Myriad Gardens occupies 17 acres at Robinson and Reno in downtown Oklahoma City. The length of the Crystal Gardens is 224 feet and an airborne footbridge passes along most of its length. Below are tiers of dense foliage from around the world. Planners held a competition in 1971 to determine the design and the winners were Conklin+Rossant of New York. It took 3 years to construct the building, and another two to select and install the plants.

In April 2010 a year-long renovation was begun. This work includes replacing the more than 3000 windows in the cylindrical Crystal Bridge and repainting the steel framework. A new entryway, cafe and courtyard will also be added on the south end.

There are plenty of reasons to visit Myriad Botanical Gardens- there's the gardens (duh), there's the moist tropical air or maybe you just want to ponder some of Oklahoma's most unique architecture. For more information on Myriad Gardens and the renovations visit www.myriadgardens.com.
By JRB at December 10, 2010

i need to copy some info I have on this project and get it to you..