Admiral Boulevard is the north-south division in Tulsa. It was also known as the northern border of the Cherokee Nation, but that was back before anyone cared much about a Tulsa address. Through the years Admiral has been known as Federal Way, Route 66, Highway 33 and- to the tragically nerdy- the 36th parallel.

There's a slew of cool neon along Admiral, mostly due to its former status as a highway and major thoroughfare. On the eastern end was the Traffic Circle- a feature that most Tulsa drivers seemed to loathe. It was intended to handle high traffic load without a stop light- which it still does today. At one time this was also a major highway junction of Route 66, OK-33, US-169 and the Skelly Bypass.

In the Sixties there were also a number of suburbia-style shopping destinations. One of the finest, Sheridan Village, was at the southwest corner of Admiral and Sheridan. Rooftop parking was a futuristic notion back then. 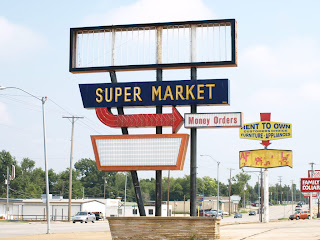 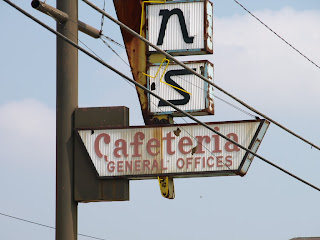 Photo Tour: Admiral Boulevard in Tulsa
By JRB at January 22, 2011