Bruce Goff is known for his unusual architecture. So our visit to the home he designed for the Cox family in 1949 was a bit of a surprise. 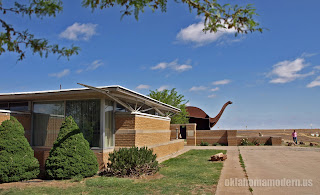 From the street it's easily the most "usual" home by Bruce Goff we have ever seen. It even has vertical walls, brick veneer and square corners. There are no spheres or conversation pits or Klingon-inspired roof escarpments. It would be easy to overlook the Cox House. Odds are you'd miss it- even if someone told you to keep an eye out for a Bruce Goff house in Boise City.

Yeah that's right: Boise City, Oklahoma (rhymes with Joyce). The only American city bombed in World War II sits smack in the middle of No Man's Land, the epicenter of the terrible Dust Bowl. Here in the wide open nothingness of the Oklahoma Panhandle is this house, designed by this unusual man that called Oklahoma home for many years. 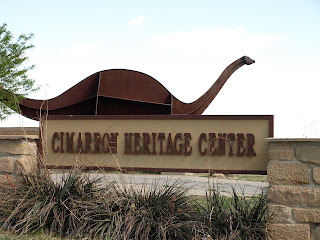 Today the house is home to the Cimarron Heritage Center, a museum and historical society for Oklahoma's most western county. The facility is best known for its giant lawn ornament- a steel dinosaur nicknamed "Cimmy." We happened by on a Sunday- but even though the museum was closed we wanted to drive by just to snap a few photos. As luck would have it we met Morris Alexander, a museum volunteer who was outside watering plants. Like most folks in this part of the country, he was friendly as can be, and was more than happy to show us around.

Goff designed this home for Julius and Opal Cox. Mr. Cox was the International-Harvester dealer for Cimarron County, which is a pretty big deal out this way. One of the Cox's sons had met Goff while serving in the military and persuaded his folks to let him design their Dream Home. And while the home may appear rather normal, a closer look reveals evidence of the eccentric Mr. Goff. It would seem that while he restrained himself aesthetically he was hitting on all eight when it came to construction techniques.

The roof is made of concrete panels punctuated by a series of holes. These holes run the span of the roof and were intended to save weight and allow cooling air to pass through. While it's questionable how well they help cooling, they make a wonderful aviary. A makeshift barrier of chicken wire has been wrapped around the edges of the roof to dissuade the local birds from roosting in the holes.

Another technological feature Goff included was a clever cooling system adapted to the local climate. Louvers below major windows were intended to allow cooling air to be drawn in by a large ventilation fan. The fan was originally installed under a round smokestack apparatus visible in early photographs. The system relied on hedges planted near the louvers to filter the Oklahoma dust and a system of water sprinklers to cool the incoming air. Unfortunately these niceties were never completed, so the ventilation fan just sucked in massive amounts of dust, and the smokestack and fan were later removed. 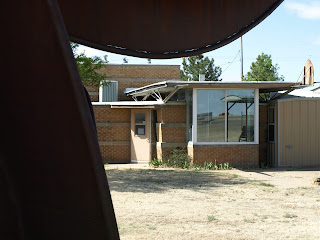 Over the years the house has seen its share of repairs, updated windows and an addition. Overall the house is in very good condition and retains most of the original features and appliances. The addition was built about 10 years after the house was completed and added a bedroom, porch and basement. This expansion was also designed by Goff. Borrowing a page from Frank Lloyd Wright's playbook, Goff had stipulated in the original contract that he must approve any architectural changes to the house. He most likely would not have approved of the more recent window upgrade! While it is a big improvement in energy efficiency, the heavy aluminum frames don't fit in well with the look of the house. Finding suitable windows for Mid-Century buildings can be a real challenge.

Inside the house we found an eclectic clutter of historic artifacts and well-preserved furnishings. The living room appears to still serve as a living room, providing a meeting area for the historical society. As Morris leads us through the various rooms it's easy to tell his admiration is tolerant at best. "What do you think of that kitchen?" he asks, pointing down the long narrow galley of cabinets. "How would you like to work in there all day?"

We walk further into the house and stop in front of a small shrine to Bruce Goff. Plans, photos of the house when new and a small collection of books on Goff's architecture are on display. About this time I notice most of the interior doors are accordion-style, a feature that must have seemed ultra-modern in 1949! Further back is a Santa Fe Trail exhibit that occupies what used to be the back porch. Beyond that is the main exhibit area, a steel building completed in 1997.

Returning to the long galley kitchen Morris shows us a huge collection of buttons. They're framed in large displays under glass. "We had to put them under glass," he explains. "Back in the Seventies a family visited us and the teenage son stole a set of zodiac buttons. That was big back then."

I asked if they ever got them back. "Oh sure, their name was in the guestbook- address and all. We wrote them a letter and they mailed them back to us a few weeks later."
How times have changed.

Photos were lost when we stopped using Flickr.
Thanks for asking - I'll have to update this post.