We were saddened last week to learn about the loss of a dear friend, Lynne Rostochil. She quietly lost her battle with cancer on November 7, 2019. 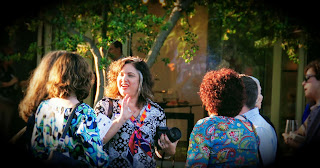 Lynne was well known in the historic preservation community. With a passion for modern design rooted in her genes (her grandfather was the respected architect R. Duane Conner) she crusaded for some of Oklahoma's finest "underloved" buildings. She even wrote a book about it!  Oklahoma City's Mid-Century Modern Architecture was released in 2017 and features archival images from the Oklahoma History Center (where she volunteered) as well as her own photography.

Her popular photostream on Flickr is a staple for any self-respecting Umbra chair owner. She was constantly snapping roadside architecture, ghost signs or shots of buildings many people would consider ugly. Some of those photos would form the backbone of a blog called Okie Mod Squad, created to support a group of casual gatherings that began in 2009. Those casual gatherings eventually became a popular Facebook community, and civic force for change when historic structures were threatened with demolition.

The most recent battle continues today over the iconic First Christian Church, an effort close to Lynne's heart as it was designed by her grandfather. She was even honored with her own day, "Lynne Rostochil Historic Preservation Day" by the Oklahoma City Council.

A memorial service will be held at Quail Creek Golf and Country Club on Sunday, November 17th at 2:00 PM.