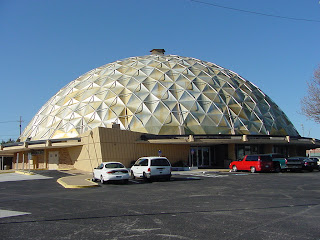 Last month the National Trust for Historic Preservation presented their 2007 Board of Advisors Award to the Gold Dome Bank in Oklahoma City.

I remember seeing this building as a child from the back seat of our Ford Galaxie 500. That entire area around 23rd and Classen always fascinated me— the Townley's Milk Bottle, The Price Tower-esque office building and the brick storefronts lining Route 66. When the word got out that Walgreens planned to demolish the Gold Dome Bank I was working for About.com as their guide for Tulsa. I immediately began typing a feature about the volunteer effort to save this 1958 aluminum-clad beauty. It's inspiring to see those efforts paid off!
By JRB at November 12, 2007 No comments: 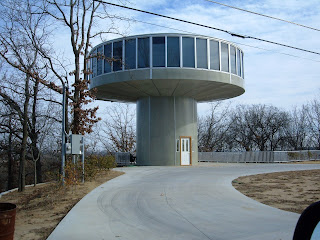 One of the wackiest homes around Tulsa is this gem. It's located just east of Sand Springs off Edison. Now that the trees are losing their leaves you can catch a glimpse of it when traveling westbound on US-412. Look to the north as you approach the 65th Street exit.

The house is situated on a hill with the garage underneath. The circular drive you see in the photo leads to the front entrance– and a rustic-style door that seems quite out of place on such an avant garde structure.
By JRB at November 05, 2007 1 comment: