Modern Home in the Osage Hills

Several years ago we noticed an interesting real estate listing. It was a home for sale in Osage County "only 15 minutes from downtown." 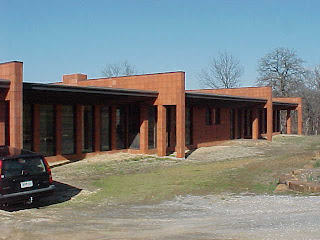 It was advertised as a custom-built home on 5 acres. Seems like it mentioned something about being designed by a well-known architect (although I do not recall or know who did design this house).

We decided to take a drive and have a look at it.

At that time the house was essentially an unfinished project. For the most part it was all there, but a good deal was left to be done. We looked, snapped a few photos, thought it was interesting, but decided it would need too much "redesign" and way too much work. 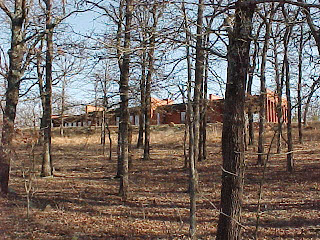 For instance, the house pretty much had no kitchen. What sufficed for the kitchen was better suited to a break room or motel kitchenette. The concrete floors were plumbed for convection heating, but no heater was in place to connect.

The property this house is situated on is very cool. It's on top of a hill overlooking the rolling hills of the Osage. About 50 yards behind the house is a small pond.

The last I heard about this unusual property was in an article in the Tulsa World. It was back on the market, but this time it was finished and (gasp!) it even included a kitchen!
By JRB at January 10, 2008

Do you have any follow up to this home? You mentioned Tulsa World ran an article on it? Any idea when or if it's still obtainable? It's a very fascinating design.

I worked on this house (very briefly) when I was interning for Steve Turner. I want to say it was done for some with the last name of Kinney. Steve was a huge FLW fan and some of his other modern houses, including the Stokely residence in Broken Arrow, reflected that.
I remember the house being very open on the interior with a stepped vaulted ceiling. I have construction photos if anyone is interested......

I should have pointed out- while this article is dated 2008, but our visit was circa 2001. I have a few more photos that might be worth posting.

It was probably 5 or 6 years ago when we saw the article in the World. Since that time I have learned the house was designed by an architect named Steven Turner. The home is situated on a hill overlooking the Post Oak Lodge and Oklahoma Centennial Botanical Garden.

That was just what I thought it was influenced by whoever designed it, great to finally have a name to go with it. It definitely is in line with FLW designs. Would love to see more from construction or finished

I'll post some more of my photos of this house on our Facebook page. Check the gallery called Outtakes!

Is the property sold now? I'm interested if not occupied.