Here's a special mod and hip Christmas present for all you fans of Mid-Century buildings- compliments of Uncle Sam!

The General Services Administration (GSA) manages about a zillion square feet of our Nation's floorspace. Everything from courthouses to salt mines used for underground storage. Many of these government complexes were built in the postwar era. Minimalist and free of excess adornments, they appeal to a modern aesthetic. Most are not what your Average Joe would consider "purdy," but many are important examples of modern architectural design.

But the good news is the GSA got the memo! Beginning in 2000, primarily due to outrage over a planned renovation to Denver's Federal Building, the importance of Mid-Century Modern was made clearly evident. Since then the GSA has realized the historic importance of many of the federal buildings under their management.

Last October they were even recognized for publishing Growth, Efficiency and Modernism: GSA Buildings of the 1950s, 60s, and 70s, a must-read for understanding the challenges of modernizing buildings from the recent past. This 120-page brochure is also a great tool for expanding the appreciation of postwar and mid-century architecture in general.

This free series of eleven posters highlights modern federal buildings across the United States. Printed on heavy bond, each poster measures 24" x 36" and are oh-so suitable for framing. The following link offers details on each building and an email link to request your own copy of each poster (no order form is provided).

The series features dramatic photography of a notable feature of each building. Architectural styles in the series range from Formalist to Sixties Modern. Oklahoma's only building in the series is the Oklahoma City Federal Building and Courthouse (right) which was completed in 1961.

Most of the series can be downloaded in PDF format or ordered for no charge by contacting the GSA's Historic Buildings Program with your mailing address and which posters you want at the following link: 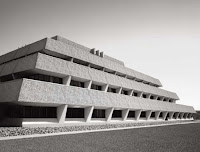 So order your favorites today and enjoy your free Christmas gift. Best wishes to all of you and have a happy 2009!
By JRB at December 25, 2008

Is it really free mid century poster? I am curious to know about it.