The centerpiece of this complex is the Cherokee National Museum- a classic example of Seventies "State Lodge" style architecture. Designed by Cherokee architect, Charles Chief Boyd, the building was built in 1972 from native sandstone rock and modular poured-in-place cement panels. The sloped walls and large window areas echo the design of ancient Cherokee structures.

Outside the entrance is punctuated by three columns- all that survives of the Cherokee Female Seminary School that burned in 1852. A small pond surrounds the columns and extends into the building, a cool feature that unites the interior with the out of doors.

Inside the museum offers a dramatic exhibit detailing the forced removal of the Five Civilized Tribes- a plight known as the Trail of Tears. There is also a recreation of a pre-statehood village and an ancient Cherokee village featuring a living history tour.

The center is open Monday through Saturday 10 am to 5 pm and Sundays 1 pm to 5 pm. 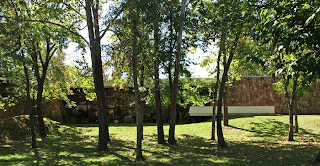 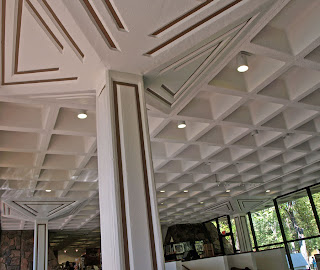 Cool place! I've never heard of nor been here.