Last summer we passed through Cushing, Oklahoma during a road trip searching for Lustron Homes in Oklahoma. We found the two Lustrons located in Cushing, then proceeded to cruise this once-bustling oil town. You should be glad we did! 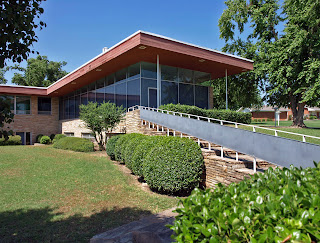 We turned off Highway 33 on Highland Avenue and proceeded south. At about 9th Place we found ourselves in the midst of a Mid-Century Mod haven. Low-slung ranchers were spread out alongside a small creek. The creek also provided space for a neighborhood park.

It was a beautiful area and the homes are well kept.

Turns out, many of these homes were designed by the late Blaine Imel. Born in Blackwell, Oklahoma, Imel grew up in Cushing and served with the Marines as a fighter pilot during World War Two. During the war he shot down 3 enemy planes, jumped off his aircraft carrier after it was kamikazied and earned numerous medals. After the war he studied architecture at OU under Bruce Goff, and that influence shows in the circular themes and organic shapes found in much of his work. For many years he practiced architecture in Tulsa, and designed many notable homes, schools and art galleries. Imel passed away in 2005. 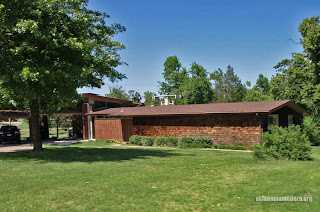 Here are some highlights of our tour of Cushing. Not all of these are the work of Blaine Imel. But all of them are notable modern buildings and worth a look if you happen to find yourself in the "pipeline crossroads of the world," otherwise known as Cushing, Oklahoma. 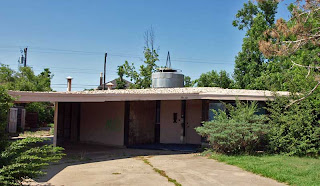 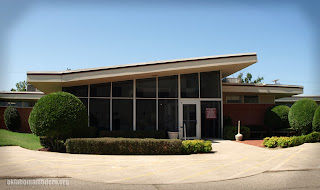 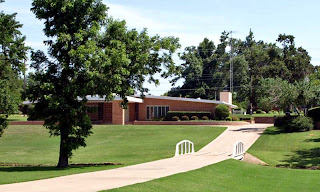 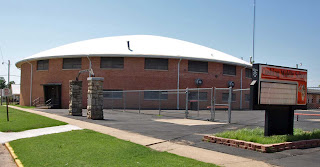 We also discovered a very cool building across from the old rail depot. It used to be the headquarters for an oil company- now it appears to be some sort of city offices.

I hope you got to see the Gillespie Drilling Company Building mentioned by Rex, it was designed by Blaine Imel.

I came across this old blog looking up information about Blaine Imel, we came across the Gillespie building in Cushing yesterday and thought it was a Goff at first, when we figured out who it was, found out he actually studied under Goff.

FYI, we have been on a few architecture trips recently, don't know why it took me 50 years to appreciate this stuff.