Anyone who questions the validity of architecture as a tourism generator in Oklahoma got a firm rebuke last week. The unique skyscraper in Bartlesville known as the Price Tower was included on a list of Frank Lloyd Wright structures nominated for international recognition by the United Nations Educational, Scientific and Cultural Organization (mercifully known as UNESCO). Just the nomination is a huge honor, and recognition as a World Heritage Site would mean a huge boost in international visitors to the Price Tower. The 19-story skyscraper currently houses an art center, boutique hotel and a struggling restaurant. 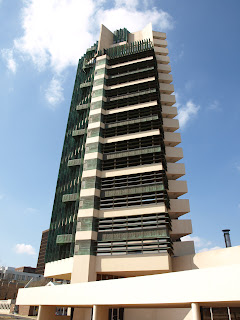 If approved the ten properties would join 911 other sites currently on the World Heritage List, of which only 21 are in the U.S. It's also interesting to note the FLW "serial nomination" is one of the first to be considered on its artistic merits. Most of the UNESCO sites in America are listed for their natural beauty, and those listed as cultural sites are recognized mostly for historical reasons. Not to say there is no historical significance to Wright's work- it most certainly influenced generations of architects. But the nomination focuses more on his architecture as works of art, and that is a first.

More details on the nomination from UNESCO
By JRB at April 20, 2011