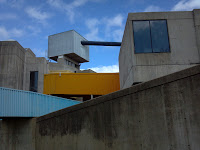 Call it Mummer's Theater, Oklahoma Theatre Center, Stage Center- or Tinkertoy Town. The oft-maligned complex at North Walker and West Sheridan appears to be doomed. Recent plans call for a mixed use high-rise office tower to be built on the site.


Stage Center was designed by John Johanson in 1970 as part of the grand. The building won international accolades from the architectural community. But the eclectic mix of Brutalist facades and inside-out geometry was instantly polarizing and found few fans in the general public. 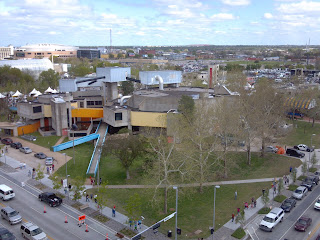 Through the years the building had a rocky history. Financial troubles continually plagued its tenants. Stage Center had been in disrepair for many years- then a flood further damaged the building in June 2010. It has been vacant ever since.

An eleventh-hour effort by the AIA sought to find a suitable tenant but to no avail.

History and Downfall of Stage Center from KOSU...

Down, but not out.

A last-minute effort to halt demolition of the unique Stage Center/Mummer's Theater complex has been launched. You can help by signing the below petition!

Many preservation groups across the country are coming together to halt the demolition of this iconic building. Act before the meeting on January 16, 2014.